I thought I'd let y'all know what's going on with the boys... who should I start with? 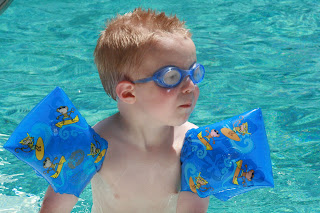 Luke is very much embracing year number three. He's pretty much decided that he's not going to nap. Occasionally, I can trick him into going upstairs and watching a movie and occasionally that ends up in a nap. More times that not though it just gives me about 30-45 minutes of quiet time, which is okay too. I do have to admit that summertime has actually gotten him to take a few more naps because we're outside more and he's just playing harder. He's actually become a little swimmer! He started swimming with his arm floaties while we were at the beach and now he LOVES the pool. He called the goggles in the picture above his 'water glasses'. He is a typical boy... he hates to wash his hands and brush his teeth. It's literally a fuss every single time. We're also going through some major food issues. He has a really strong gag reflex. Just recently we had steamed broccoli (one of the few veggies he will eat, at least it's a good one!) for dinner. He also had a roll on his plate. Water from the broccoli got onto a bread crumb and Luke started gagging. He was saying that it was 'choke', which is his word for throw up. He literally made himself gag! Dinner was over for him. I told myself that I would never be a short order cook but that's what I am. I guess I feel bad for him because I feel like he really does have some food issues. Twice in the past few months he's thrown up from putting too much in his mouth. He puts too much in his mouth thus causing him to gag and then throw up. If I even attempt to put something on his plate that is 'unappetizing' to him he goes nuts and refuses to look at his plate. Or if something doesn't feel right in his mouth he'll gag. I'm not really sure how to help him with these issues. I really don't want him to be the kid who will only eat chicken nuggets and french fries! Ok, that's not all he'll eat. Here is a list of things I know he will eat:

He's recently stopped eating rice, bananas and peaches. He will sometimes eat corn on the cob, green peas, broccoli and cauliflower. That's really not that big of a list! I'm sure there are some things that I've forgotten but that's pretty much it. Anyone have any ideas or suggestions to try??

One funny story about Luke and I'll share a few things about Eli. Tonight after the Hubs put Luke to bed, he started crying. So, I went upstairs to check on him and he was saying something about his bed being wet. He had some water in a sippy cup and a tiny bit spilled. This kid will do ANYTHING to avoid sleep. I must share the trip to the beach story sometime soon... anyway... He looked at me and held up his pointer finger and said, "Please read me ONE story" so I agreed. I read Duck Soup, which is one of his favorites right now. After I finished I said, "Ok, it's time for bed. I love you and I'll see you in the morning." He raised up his head and raised up his hand... he was concentrating on doing something with his fingers. He said, "Please read me ONE more" and as he said "one" he managed to get the finger he had been concentrating on getting up. His bird finger! He said, "Read me this one" and as he was saying that he was pointing at me with his bird finger! It was hilarious! I was trying so hard not to laugh! He kept repeating it over and over while waving his bird finger at me... "Mommy, read me just this one more!!" 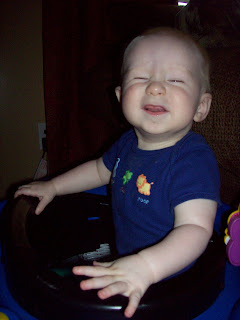 Eli had his 9 month check up last week. If you're keeping up, Eli turned 10 months old on the 29th so the 9 month check up was a little late. He didn't have any shots. It was mainly a check up to check his weight and talk to the Dr again about our dairy issues. He weighed 17 lbs and 12 oz and was 27 inches long. He's in the 10th % for weight and 50% for height. He's pretty much always been in the 10-15 % for weight so no biggie as long as he stays on that curve and doesn't drop! He is still nursing 7-10 times a day and he eats 3 meals. Breakfast is 1/4 banana and either cheerios or 1/2 Kashi fruit bar. Lunch is 1/2 jar of stage 2 dinner (he likes apples & chicken and turkey & veggies) and 1/2 jar of stage 2 fruit or veggie. Dinner is the same as lunch and sometimes he'll have a graham cracker or some puffs for snack or after a 'meal' if he's still hungry (or if I need to keep him occupied in the high chair for a few more minutes). He gets sips of water from a sippy cup too but he doesn't drink much. I have given him watered down juice before but not often. I do try to give him some table food when it's appropriate. He's had potatoes, green peas, squash and peaches so far. I have to still be very careful though because of the dairy issue. Speaking of that... I have successfully added all dairy back into my diet except milk and ice cream. I say successfully but we still need to do a poop test to be sure there isn't anything hidden. After a successful poop test, I will add milk back to my diet. Then we will watch for 'things' and have another poop test. Then it will be time to start introducing things to him... very slowly! :) It looks as if he is growing out of his dairy intolerance and that is a wonderful thing!!

Last Friday (7/3) Eli's first tooth decided to pop up! It's been visible from underneath his gums for probably three weeks and had been bothering him for at least 2! It finally broke through the skin! It still doesn't look much like a tooth because it's just barely visible but I'm sure in a few days it will be more noticeable. Eli is a happy little man (as long as he has momma). He grins and smiles all day unless you take the remote or phone away from him! He makes the cutest face when he grins. He scrunches his nose up (see pic above) and almost snorts as he smiles! He's so funny! He's recently learned how to clap and likes to show off his new talent all the time. Even tonight as he was nursing to sleep he raised his little hands up and clapped a few times! We're still having sleep issues and attachment issues but I've decided to go with the flow! Sleep will come one day. I'm hoping that when Eli finally has his own room he will begin to sleep better. He wakes up often at night but he knows I'm just a few feet from him! He does end up sleeping ON me some because I get so exhausted. I've gotten better at making myself stay up to get him in the bed and it seems to help. He's still really attached to me. I haven't stayed in a worship service in probably close to 4 months. I try to think positive though.. he could go to anyone and everyone. But he trusts me and knows I will take care of him and that is a good thing! I know that I'm doing the right thing by not allowing him to "cry it out" because Eli doesn't cry it out or eventually forget. He cries... and cries.. and cries... He gets completely beside himself. So, until he is more comfortable I will just keep doing what I'm doing.. allowing him to outgrow this stage! :)

Wow, I've typed too much. I could say so much more. I really need to share more about the kids on a regular basis. They are growing too fast and learning so much!

great idea for a post! It was fun learning what the boys are up to as well as their likes and dislikes ;)

Jack sounds a lot like Luke with the food issues. Jack will gag everytime he tries something new or even a food that he does not prefer. It makes it very difficult because he use to eat those things...so why now does he gag??? I wish I knew the answer b/c it would sure save a lot of dinnertime battles.

Yay for dairy!! I would LOVE to drink a big ol' glass of milk right now!! I think I started doing stuff like that too early with Raegan and she spit up A LOT! I have decided to do better this time so, I am avoiding dairy and gassy foods for a while! It is pretty hard on someone who loves garlic and onions and pretty much all other gassy foods! It is worth it though, because she doesn't spit up at all so far!!

It sounds like the boys are doing good! I am excited for y'all about the new job and your new house! I know y'all are too...but, I know your parents are going to miss y'all! I'm sure it is time though!

Have you talked to Amy? Is everything going good with their new baby?

LOL that gag reflex cracked me up with the water on the crumb. He must be very picky and one that doesnt like foods to mix. Ashlyn's thrown up with green beans but that's it. So strange how kids think they are little adults at this age, well at least my sassy girl does, ha.

I know I'm a couple weeks late in responding to this... but I really suggest getting Luke evaluated by head start/early intervention. What you've described sounds like more than just pickiness. These evaluation services are free of charge.