I've got to get back into the swing of things! I really do miss blogging but life with 2 kiddos is still very new!! Not to mention the crazy stuff that has gone on(more on that later). 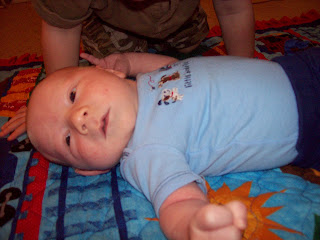 Eli is one month old today! Time just flies by! His little belly button 'stub' finally fell off Friday! He and Luke both wanted to keep theirs longer than normal. We had to take him in on Thursday to get them to cauterize it and we had to do the same thing with Luke. Eli is growing so fast! He has already started smiling! He first smiled at me at 3 weeks and 2 days which seems really early but it was a for real smile! Luke smiled at 5 weeks so Eli beat him by 2 weeks! He's not super smiley all the time though just rare moments (like early in the morning at 5 am!). He's still practicing! I'm not sure how much he weighs but at 2 weeks and 5 days he was 9 lbs and 21 inches long! And he is definitely a Mommy's boy!

Luke had a tough weekend (as did we all.. well, except Eli! He had no clue what was going on!). At the Dr's office on Thurs Luke fell asleep sitting in the Hubs lap. He was really sleepy all day long and that night I took his temp and it was 102. He had no other symptoms but was just kind of cranky! Friday he ran a low grade fever and was cranky and didn't nap well at all. He woke up 45 minutes after being put down and was really hard to console when he got up! I knew that he was in pain but wasn't really sure where. We noticed a little spot on his lip that night but I though it was just where he had bumped it. Well, Friday night he slept horribly! He was up on and off all night long. The Hubs did a great job at doing what he could to help the little guy but he was really just beside himself. Saturday we called the on call nurse and she suggested we watch him the rest of the day and assess the situation in the am. Well, that was a bad idea! By Sat night we both knew he needed to see a Dr. We realized that the little bump (which now had another one by it) was more like a fever blister of some sorts. Luke wasn't eating and was just not acting himself. He was crying constantly and was certainly in pain. So, the Hubs took him to an after hours clinic around 6pm and thankfully my mom met him there. Well, it seems that Luke has/had some kind of viral infection that causes blisters inside the mouth and throat. And it is very painful. The only thing you can do for it is give pain relievers.. although the Dr did give him some cough medicine to help dry up the blisters (which I think really helped.. plus helped him sleep!). My mom decided to stay the night with us (a huge blessing!). I mean I kind of have my hands full with a 4 week old so the Hubs needed some reinforcement. I think Luke may have slept 3 broken hours Saturday night. It was horrible. I think we all cried at some point (with Luke doing the most of it). I couldn't stand not being able to help him. He refused to take any kind of medicine at all. We finally called my dad and he came around 5:30am. Luke finally calmed down some with my dad and we actually got him to take some tylenol and then his meds after the Hubs went to pick them up. We had a rough day yesterday though. By the afternoon Luke was exhausted. At one point he fell asleep sitting up on the couch! He wouldn't eat hardly anything and wouldn't swallow (which led to massive amounts of slobber). He hardly talked much either. He just hurt so bad in his mouth and throat! So, once we started pumping him with tylenol and getting that cough medicine in him he really started to feel better. He slept yesterday evening from about 3:30-7pm and then from midnight to 7am. He's napping right now and has eaten pretty good today. I can tell the little blisters on his mouth look a lot better. Oh and I didn't mention that both of his ears were red too so he got a shot and antibiotics! My poor little guy has had it rough.. but it looks like we're on the mend! Here is a link to what I think he had. I wasn't at the visit so I'm not sure what the Dr called it! And here is a little picture of my man passed out on the inflatable bed yesterday evening: 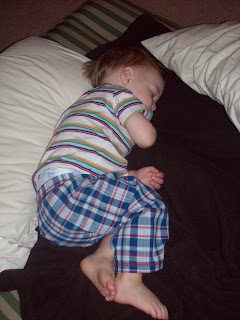 And here he is last night. I got up around 1:30am to find him like this. Later around 4:30am he had made it to the inflatable bed. The hubs stayed with him last night while Eli and I stayed in our bedroom. 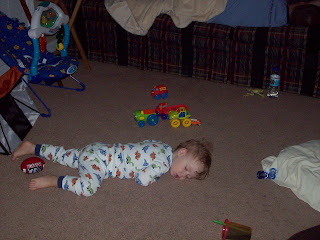 Aren't they pitiful?? Well, time to get supper ready before both of my guys wake up!

Poor baby boy, how miserable he must have been. I have never heard of such a thing. He does look so pitiful but I'm glad to hear he's on the mend.

Eli is looking strong and healthy. Glad things are going well with him.
I'm curious how it will be when we have a second, must be so different!