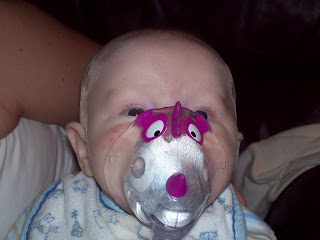 Is this not pitiful?? Luckily, he hasn't been bothered much by it. If you read my random list from Monday, you know we had to take the little guy to the Dr. We left the house around 2:15pm and got home around 8:30pm! We had to pick up Luke who was at my parents and they live an hour away from us so we weren't at the Dr's office for that long but it was a long evening to say the least!

The little man has bronchiolitis. So, that's why he's got the dinosaur mask on! Along with breathing treatments for a week, he also got a shot and a round of antibiotics that has left his poopy diapers a nice shade of grass green (I know you wanted to know that). Dr. C said his lungs sounded pretty nasty but "no need for hospitalization. You can treat this at home." Ok, so that freaked me out! Just hearing the word hospitalization! Like the Hubs said, "Don't mention the word 'hospital' unless that's where we have to go!" Seriously.

And although he is a sick little boy, you would never really know it by the way he acts! He is the happiest little guy! He jabbers and talks all the time! Man, I love him so!
I took two videos of him 'talking' last night and this isn't the best one... but I had to show it because I'd like you to notice at the top left of the screen, what Luke has on his head. I didn't realize this until after I uploaded the video. I had taken it off to get more light in the video. Haha... kids..

LOL! We have that exact same mask! Glad to hear the solution was a nebulizer and not the hospital.

Bless his heart. I just hate when babies are sick, it's so hard on everyone but at least he is in good spirits. But so good you can treat it at home too. cute video!

haha....Luke's "hat" is funny! Eli talking is SO precious! I love when they get to that stage!

I hope Eli is better now!