I'm so behind on updates and that kind of thing.. I started this a few days ago but just haven't had the time to finish it! I have tons of blog posts swarming in my brain but no time to actually type them!

Eli's 2 month check up was last Thursday. The little guy weighs 11 lbs and 4 oz and is 23.75 inches long! Everything was perfect! He did really well with his shots. Luke also had a little check up! We had delayed his MMR shot, so he had to get it (tried to get it a few months ago but couldn't because I was pregnant!) and the flu shot. He did really well too! At one point we told him how much of a good job he was doing and he agreed with, "I did do good job!" over and over in the midst of tears! He weighed 30.5 lbs and was 35.75 inches tall. Dr. C mentioned how blessed we were to have two healthy boys! That is something that I never want to take for granted!
After there visit we went to stay with Mimi and Grandaddy because we had planned on being in town for Halloween night. Sometimes, living an hour away with 2 little ones, it's just easier to stay the whole day (or night!). Luke dressed up like a scarecrow.. or farmer.. or just a cute little boy in overalls (whatever you'd like to call it!) for Halloween. He wouldn't let us stuff him or put any kind of 'paint' on his face but he was super cute! Eli didn't dress up but did have a cute Halloween outfit on. Here is Luke checking out the candy at Mimi's: 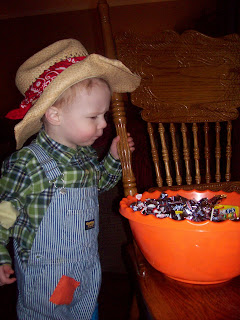 My boys are growing so fast! Eli is 10 weeks old today! He is smiling, cooing and even trying to laugh! It's the most precious thing. Two nights ago he rolled over from tummy to back... not really on purpose, but he still did it! He's also really beginning to notice his hands. He stares at them when he catches a glimpse like, "What are those things and how do I make them move??" He's also gotten them to his mouth a few times to chew on! The dairy elimination worked wonders! He is much more content just because he feels so much better! I've been dairy free for almost 5 weeks now. Here is a picture from this afternoon, hanging out with Daddy: 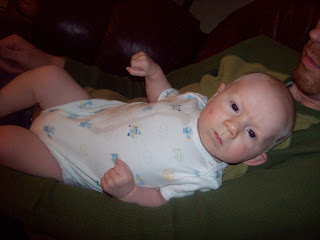 Luke is such a big boy! He says the cutest and funniest things all the time! I love watching him figure things out! I can just see those wheels turning in there! He is so smart! He's such an encourager too. He's always telling the Hubs and I that we're doing a good job. Just the other day he asked me what I was doing and I told him I was making a sandwich for lunch. He responded, "Good job, Mommy". It's nice to be told that every once in a while! :)
Here lately he's really been into singing in his toy microphone and playing his guitar (or 'paytar' as he calls it)! Wednesday night at church the Hubs was standing around talking while Luke played with an old mic that he found. The Hubs stopped because he could hear Luke singing and wanted to know what he was singing. He was singing "Amazing Grace"! The Hubs said it was the sweetest thing! We've never heard him sing it before but I've sung it to him (& Mimi too) many times. I got him to sing me the first line, but that's all he would sing for me! Of course they never want to preform when you want them to! Those moments when they don't realize they are being watched are priceless though!

Time to go hang out with all of my boys before bedtime!

I can understand why you don't have time to blog! Enjoy this time with your boys...we'll still be here!