We're in the house! Things are sort of, kind of starting to look like a home. There are still a few boxes that need unpacking. But mostly now I'm just trying to find a place for everything. I have given away lots and still have more than needs to go to Center of Hope. When we moved I didn't do much of the packing. We left immediately that day in a hurry and then my Mother In Law did most of it (Thank you, Thank you!)! You do have to remember that I had a nursing (attached to me 24/7 at the time) three month old and we were an hour away from the house. So, it was hard to do much of any kind of packing not living there, being an hour away and with a baby. So there are lots that I just want to get rid of.


I have a growing list of things that I need that you don't think about until you need them.. like one of those dish scrubby things. I need one.* I went to the grocery store yesterday and bought some things mainly just to get us by. I was making eggs this morning and needed some black pepper*. Didn't have any! Our spice cabinet consists of cinnamon, garlic powder, salt, oregano and crushed red pepper. All things my mom grabbed up on a trip to Big Lots! It's so weird starting a household over. Hopefully next week I can start back at making menus again. Time to look for good sales and hunt out those coupons! Honestly, I am looking forward to it. I always felt very good knowing I was helping our family save money. This time the need for saving is even greater and the need for finding good meal ideas on a tight budget is going to be a challenge. But I'm up for a challenge!


The kids have done great transitioning households. We've slept here six nights so far and Luke has only gotten up once at night. That was only because his music stopped. He sleeps with Praise Baby and Veggie Tales Lullaby's at night rotating. So, he ended up in the bed with us because he woke up to silence and was scared. Eli has gotten up twice every night but two. And those two nights he only got up ONCE. Yes, I can hardly believe it myself. It's amazing what sleeping in separate rooms will do! He is actually waking up in the morning and from his naps happy! He seems to be a lot like Luke in the sense that he does like to sleep alone. Luke has never been one to want to be in our bed all the time. Except for the occasional instances, Luke has always liked to sleep in his bed. I think Eli will be the same.

We're also working on baby proofing the house for Eli. Like securing everything to the wall. Seriously. I agree with the idea that you can't change everything in your house for your children. They have to learn there are things not to touch, climb on, pull on. But you also have to think about their safety. Eli is little and although he is learning what "No" means, it doesn't mean that he's always going to follow those rules! And I can't watch him every second of the day. He would love if I just held him 24/7 but it can't be done and honestly I don't want to hold my squirmy 11 month old all day either. So, we have no lamps in the den. Eli pulled the lamps at my Mom's house on him twice. Big lamps. And ours are made out of wrought iron material. Not good for the head.. or arms... or anywhere else it might fall! And the TV is attached to the entertainment center.. and the entertainment center is attached to the wall. The rest of the furniture in Luke and Eli's room will be secured as well. Our room will be off limits for him to just freely go. Some of you know about our disaster that happened a few months ago when Luke tried to feed the fish. So, needless to say we want to avoid anything like that. And if Luke will do it.. you can be sure that Eli will do it a thousand times more.


I just realized that I did not blog about the disaster. I won't go into detail but I will share the pictures. Let's just say I was home alone with both boys.. couldn't get in touch with anyone! And thank goodness for the plastic container of Mega Blocks. I found Luke in that hole between the container and wall! He was fine.. soaked in fish water, 4 gallons of fish water.. but he was fine. 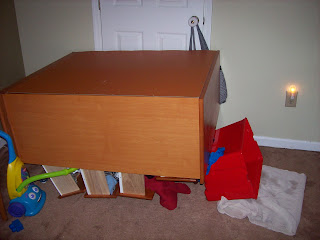 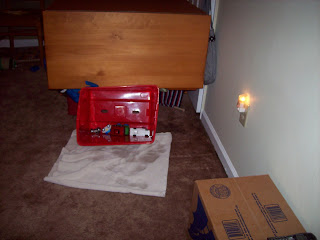 Well, time to get back to making this house a home!

*I wrote this a few days ago and I have since then gotten me a scrubber thingy and black pepper!

And, I completely understand about having to make your house safe for your children.