It's been a while since I gave an update on the boys, so I thought I'd fill you all in on what's new (and old) with them.
Here's a little brotherly love to get us started! 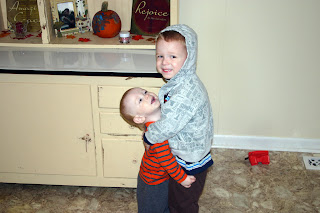 Luke is growing, growing! It never stops, does it?? Right now some of his favorite things are:
Blue's Clues!! He only has one DVD that has 3 episodes on it but he loves to watch it. His favorite episode is the one where Joe and Blue are playing store.... which leads me to his other favorite thing, playing store! He plays with some of our old gift cards for his 'money'. I think it's crazy that when I was little I played with fake money.. not cards! Anyway, he doesn't have a cash register (Santa's bringing that!) so right now he uses either his v-tech computer or his tackle box for his cash register. He still loves to play trains or cars and he loves for me or Daddy to sit and read books to him. He also likes to 'read' books back to us. He is very interested in letters and is asking all the time, what letter is that (pointing to a word) or what letter does ____ start with. We still do different learning and crafts throughout the week and he always enjoys that. This week we made the classic turkey out of his hand print. He had fun gluing all of the feathers on and then coloring the turkey with markers. 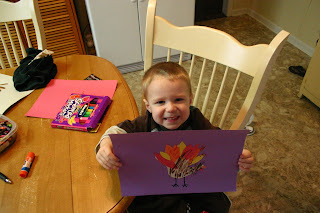 We also found some leaves that had fallen to press between wax paper. I did all the ironing but he helped me lay the leaves out on the paper and also he helped me cut them out. He's doing pretty good with his scissors but he gets impatient and then just wants to tear it! Hopefully we can make a scrapbook of them sometime soon. Here is Luke with his favorite leaf: 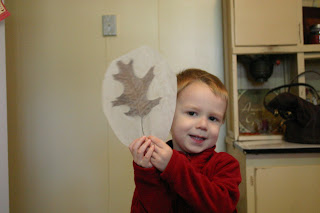 As far as other issues, Luke is doing well with going to the potty when he has to pee... Not so much for the other. Actually never. I'm trying to stay positive and just know that he will go when he is ready. I do have to make him go sit on the potty to pee though otherwise he holds it and either is making a mad dash to the toilet or has an accident.

Feels strange to move from potty talk to food talk but oh well... such is my life! Luke is still a very picky eater. I often joke that he would starve if we didn't have chicken nuggets and bread. Luckily, I make sure we never run out so we're ok. The Hubs and I are sticking to our guns at supper time. He eats what we eat or he doesn't eat. Our rule is that he must put two things that we are eating on his plate (that way he doesn't just have a roll on his plate). He may not eat it but it has to at least be on his plate. He's doing okay with this although he does sometime still want to throw a fit just for having something like green beans on his plate. I do allow him to substitute a veggie or fruit for one item. For instance last night we had taco soup and corn bread. He had corn bread and apple slices. Sounds like a horrible meal to me but I refuse to make him chicken nuggets or grilled cheese every night. I just keep praying that one day he will grow out of this. Yesterday he did eat fish sticks for lunch, which was a first. I know it's not the healthiest of things but it's nice to have another alternative to chicken nuggets! I had tried them with him before but he refused to eat them. I didn't tell him what they were this time. I just put them on his plate and he started eating! I mean it's breaded and crunchy, must be good right?? Ha!

Now for my littlest man, Eli. He is a mess! Whoever coined the phrase "Toddler Tornado" hit the nail on the head with him! He is in to everything! If it's on the floor or within arms reach he is going to get it and put it in his mouth. Luke was never bad about putting things in his mouth but Eli is a different story! (This means that as soon as the trash gets up to his height in the trash can... we take it out!) One of his favorite things is to empty things out... Luke's book shelf, Luke's wagon full of cars, the tupperware cabinet... just to name a few. This little guy loves to climb too. His newest thing is to climb up on the couch and then climb up on the back rest of the couch. I'm really getting anxious about putting the Christmas tree up! It should be interesting!

This actually just happened and I thought the picture was perfect for following this paragraph. Orange crayon. 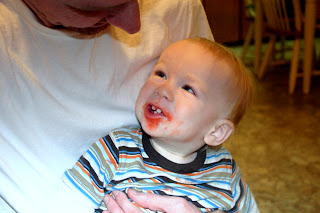 Surprisingly, he also likes to play quietly alone by himself some. Occasionally, it will get quiet and I'll get nervous! ;) Then I'll go check and I'll find Eli sitting alone in Luke's room looking at a book or playing with the Little People Barn. He's a big fan of that barn! Santa's bringing him Little People Noah's Ark! 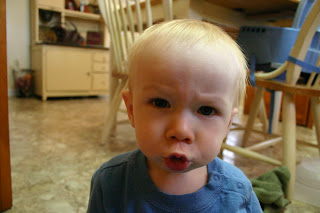 (Blogger has messed up this picture.. the original isn't all grainy like it turned out. Weird)
As far as eating goes, Eli is a good eater. You can't tell by his size though. He is tiny! I get comments all the time on his size! He will try most anything I put on his tray. Occasionally he will refuse something new but most of the time he will at least put it in his mouth. I do feed him though, and he does eat! He just burns every thing off because he never stops! And for those who are curious, I am still breastfeeding him, 3-4 times a day. I can't believe it either but I am thankful for it! He normally nurses when he gets up, before nap and bed and if he gets up during the night.. which out of the past week he's slept all the way through the night 4 times!! WOO HOO! Most of the time, if he does get up at 'night', it's around 5ish am and he goes back to sleep. I have not yet had anyone (to my face) say anything about nursing him beyond 1 year but I do know of a few who are just 'surprised' to find out I'm still nursing. I'm totally okay with that. I just find it funny that if he was bottle fed and they found out he was still taking a bottle before bed, they wouldn't bat an eye! I mean he's only 14 months old! I'm just taking it one day at a time and right now, I know he needs it. Not nutritionally so much, but emotionally. It's comfort, just like a blanket, stuffed animal or a pacifier. But those things are just that, things! His comfort gets to come in the form of me, his mommy! And I think that is a wonderful thing. I find it sad that in our country extended breastfeeding is looked at as strange. Ok, I'll hop down off this soapbox before I go any further! ;)

In other great news Eli is now staying in the nursery the entire time!! So, I get to go to church!!! YAY! He's been doing this for about 3-4 months now! He does cry when I drop him off, in fact he cries sometimes when we pull in the church parking lot! But he cries less than five minutes most days and ends up having a blast playing! A few Sunday's ago, the Hubs dropped Eli and I off and I went ahead and walked him in. Well, of course he cried when I left him. I went to see where the Hubs & Luke were at and saw that they were almost to the church. By the time they got in the door, Eli had already calmed down and was reading a book with one of the nursery workers. He'll be moving up classes soon though and I hope he adjusts well!

Well, that's enough news for now. Have a great weekend!!

It's so good to hear about how your boys are growing and developing. They are just adorable!

It was so much fun to read about those little boys☺ Thanks so much for sharing that part of your life. Those lil' dudes are truly the best blessings life has to offer.

Gosh, I sure remember leaves ironed in waxed paper - some things never change, do they☺

Wishing you and yours the most blessed of days as we break bread with friends and family or spend our time as a volunteer with any one of the numerous charities in need of our time and talents.

Peace, plenty, prosperity - my wish for the United States of America.