I guess most of you know by now that when I say, "I'll be posting this soon" it really means, "I might be posting this in the next month.. or maybe not." I had planned last week to do a post on the boys and then the Hubs and I just for journal purposes but it was busy.. and I didn't get around to it. Being a Mommy and a wife are tough jobs.. if you do them right. And sitting on the computer blogging, while I love it, is not always the best use of my time.

Today, I am going to dedicate this post to my littlest man, Eli. He is for sure my second child! He and Luke are so very different. Eli is much more laid back and 'go with the flow'... well, as long as Mommy is around. Yes, he is a Mommy's boy. All. the. way. He would be completely happy if I held him all day long. When he first wakes up, I typically hold him for about 20-30 minutes. He just will not have it any other way. We get some juice and sit on the couch watching whatever Luke has picked out (right now he's on a Dora kick). Once Eli's woken up, he gets down and plays a little before breakfast. (and I make a fast break before he realizes anything! Ha!) Speaking of playing, Eli is starting to pretend play more. I have caught him with the various Little People we have around the house, pretending. He and Luke do play some together but mainly they just play side by side. He loves to watch Blue's Clues with Luke, too. Otherwise he's not much into TV or movies.

Eli turned 20 months old at the end of April. He weighs right around 22 lbs! He's still a tiny little guy but he's growing just fine! He has a HUGE appetite. You would never guess it but most of the time he out eats Luke at the table. I am sometimes surprised at how much he can eat! He is not as picky as Luke either. He loves bananas, cheese, peanut butter crackers (that I make), cake and hot dogs! And I'm happy to say that he's been drinking whole cow's milk for about a week and a half now! No more goat's milk (um, which was about $3.50 for a quart!)! We tried cow's milk with him when he was about 15 months old and he had some stomach aches. I decided to try it at 20 months and he has been fine. The boys are only drinking Wright's Dairy though. Yum!

Eli is a little wild child! He can turn a room into a disaster in a matter of seconds! It's really frustrating for this Mommy too! It's so hard to clean when someone (ELI!) is going behind me making messes! He loves to get into things he's not suppose to. I know, I know, all kids do this. But he is much worse in this area than Luke ever was! He also loves to climb on things. Couches, tables, chairs.. if he can get on top, he will!

Eli is so funny! He finds ways to make us all laugh everyday. He has the sweetest 'cheese face' with his little scrunched up nose! He says the funniest things too! He already recognizes the 'golden arches' (which btw, we have greatly reduced from our/their diet). I call it the cancer nugget place now, but anyway. When we go to the grocery store and pass by Mickey D's, Eli shouts "Nonald's, Meeee!! Nonald's, Meeee!!" He gets this becuase throughout the day I'll ask something like, "Who wants a snack?" and they'll respond "meee!". Well, Eli just figures, I'll go ahead and say, "Nonald's Meee!" just in case you're wondering if I want to go! If he finds something silly, he says, "That's sil!" So cute!

He's also going through his 'scared' stage. Right now vacuum cleaners, lawn mowers and motorcycles are at the top of the list. Although, he is also fascinated with all three as long as they are not turned on! He wakes up a few times a week scared to death and I just absolutely hate it! But I know he's right at the stage for that to happen! We're still sleeping with the lamp on and that has seemed to help.

Oh and, he's still nursing. Before nap and before bed. No, I don't plan on nursing him past two. But if I wanted to, I could. :)

Here is my sweet love bug eating one of his favorite things, cake! 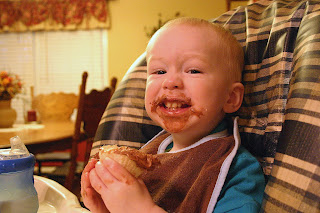 I can't imagine where he gets his love for sweets?? ;)

what a little cutey that Eli is!

The climbing thing made me laugh...must be a second child thing =)