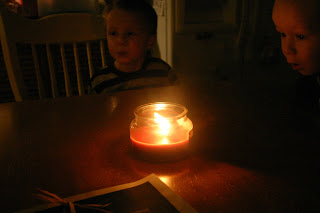 As parents, our hearts have always been prayerful that our boys would come out of Christmas season knowing and feeling the real meaning of Christmas. And even though they are young, we've always felt that it was possible. Unfortunately, in talking with our oldest just a few weeks ago, it seems that we missed the mark. So, I set out on a mission to find something.. some sort of devotional, Scripture reading, book. I hadn't really found anything that I just loved until I saw this.

I've written before about how much I have learned and gained from reading A Holy Experience. I highly suggest you taking some time to go through some of Ann's posts!

The FREE eBook is an 80 page Jesse Tree Advent Devotional. And while it started today, it's not too late to print it out!

The picture above is the boys right before we read the Scripture reading tonight. I want this to be special.. lights dimmed, candles lit.. my prayerful attempts at making an etched memory in their minds. Memories that will hopefully happen year after year.

Was it perfect? No! Both boys tried many times to blow out the candle... so many that we just moved it off the table. And yes, they were told that being quiet and attentive would get them a surprise at the end. We do Bible stories during the week so they are somewhat use to having to sit still and listen. But we know they are two and four and need much grace!

My prayer is that the anticipation of Christ's birth will be felt in our home. We will look for Jesus through the Scriptures.. longing and waiting for Him to come. 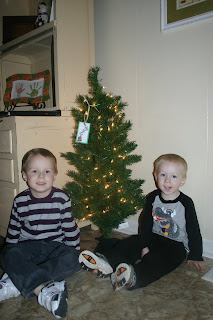 (BTW, I'm looking for some fabric to put under the tree.. burlap type fabric.. I want it to look homey)


What is a Jesse Tree?

Yes, it's menu planning time!! And it's time to start putting it up on the blog and up on the memo board by the computer! I totally got into lazy mode a few weeks ago and while I still made up a menu, I was just sloppy in my planning and sticking to that menu! I scribbled down an idea and really wasn't as focused and organized as I like when it comes to our food plan. It's so funny to me that the majority of my house is an organizational disaster but I like to be organized when it comes to my food!

So, I haven't been sick (I haven't blogged about that yet!) so, we'll see how meals go when/if that happens! So, for this week:

I'm praying that the sickies stay away until at least after Thanksgiving!:) I'm still trying to decide what I'm going to make! One year I'm going to be brave enough to let my mom off the hook and cook the whole dinner.. but not this year!

Today, I'm taking it easy and trusting God. My mom is here helping do some things around the house. So, what better way to take it easy than to blog!

I was searching around my normal stops this morning... facebook, twitter, gmail.. and I read something that hit a place in my heart...

I read of a young mother who was thankful for the opportunity to go to college and make a better life for her family. And while I can understand what she's saying, it just hurt a bit.

It seems that we as a society seem to think a college degree, a successful career and money as the ingredients to 'a better life'. But where does this ideology come from? Is it biblical? I don't think so.

I'm just concerned that these days full time motherhood isn't even considered as noble or even an option. So often even before we think about marriage and a family we set ourselves up with a lifestyle that isn't compatible with a single income family. Then when children come along, rather than sacrifice, we just continue in the rat race to keep up with our lifestyle. It's even affected our decision to 'be fruitful and multiply'. I was listening to Nancy Leigh DeMoss this week and the topic was children. They were talking about how Christians today are having less and less children. And this is effecting so many things.. socially and spiritually in the world we live in. We aren't fulfilling God's call and one of the top reasons is affordability. I was just baffled and saddened.

Is a better life really being away from our family 8-10 hours a day? Does having an abundance of nice things equal a better life?

I don't want to come across as ungracious. I am fully aware that often families have certain circumstances that keep them from this. But I'm also burdened that so many who have the option (and most do) don't seek out God's direction. And I fear it's because maybe they know what God would want, what God would have for them and their family. But maybe they aren't willing to follow so it's left ignored and not prayed about. The result: families aren't what they could be.

So, I'm praying that God will turn our hearts back to Him... back to following His heart for our families.

Stay tuned for Part 2. I want to share my struggles with being at home, even though the Hubs and I decided I would stay at home before we had children. There is often a battle in my mind between what God wants and the world's pull.

I've been thinking a lot about my blog here lately and wondering what God would have me to write about. I'm still not sure exactly but this post I read today has encouraged me to continue blogging and sharing. I'm praying that God will sharpen my focus though. I need sharpening in so many ways.

Speaking of that, one journey that I'm on.. okay, so I just started tonight... is Scripture memory. Oh yes, I've memorized a verse here.. a verse there. And of course the verses that the boys learn. But I want to know God. Deeply. So, I must know His Word.

What convicted and compelled me to do something about this lack of discipline in my life were these two posts. Go read them! I am new to A Holy Experience, but I promise you Ann Voskamp posts will captivate you. She is so full of grace and God. It is definitely good use of computer time.

So, I want to memorize Psalm 139. I'm not sure why, I just feel like that's where I need to start.

I want His Words to pierce my heart, change me, sanctify me. And I know they will if I let them. If I let them.

Here is a great short video by John Piper. He gives 8 reason why we should memorize Scripture. My favorite is the last. That is my desire.