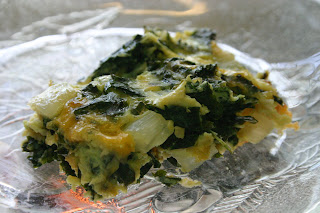 (Kale and Onion Breakfast Casserole)
I'm in the process of getting rid of our morning cereal! Yikes! I have to admit, I LOVE cereal. I love it for breakfast and as a late night snack! My current favorite is Kashi Island Vanilla. I just really want us to get out of the habit of eating it regularly. In this, I'm hoping to save money and eat healthier!

I'm not a morning person. So anything difficult in the morning is not going to fly. Something I can mix pretty quickly and pop in the oven is a good place to start. Or... something I can make the night before is even better! So, I've been mentally making a list of some of our favorite breakfast recipes and I thought I'd share them with you!

Our Favorite Pancake- Yummy, whole wheat buttermilk pancakes! I've added blueberries to these for blueberry pancakes and also Enjoy Life chocolate chips for special breakfasts! I'll also sometimes add a good spoonful of cinnamon for a different taste. I use Coomb's Organic Grade B Maple Syrup to top them! Oh and I don't use 1/3 cup of sucanat, I only use about a tablespoon in the batter. Double the recipe to freeze for later!

Maple Pecan Muffins- my boys love these! We actually had them for breakfast this morning. I use pecan chips because my boys don't like anything with large chunks of nuts! I tried out a new whole wheat flour for the first time with these. It's not as soft as the King Arthur White Wheat but it was still good. I bought it because there was no King Arthur and this new one is non-GMO verified.

Cinnamon Bun Muffins (with coconut flour)- The first time I made these it was my first time using coconut flour. It's different (softer, more cake like), but not bad and a great way to use less wheat (which I think we could all benefit from). Coconut flour is expensive so, one bag (in the freezer) has been used a handful of times over the past several months. I'm really hoping to try out some new flours in the future.

Spiced Pear Muffins- My very own recipe! Super good! I make half with no nuts (or chopped very finely) for the boys. I have several muffin recipes on the blog but didn't want to post them all. You can click the "Recipe" tab at the top to see them!

Sour Cream Waffles- So good! With butter and sour cream.. I mean of course they would be! As the pancakes, these are good to make a double batch for the freezer! I also use 100% whole wheat flour!

Egg in a Hole- Luke doesn't like eggs, unlike Eli who loves scrambled eggs! But when I make this, Luke will eat them! I guess it's the presentation of it all! It's perfect made with homemade bread!

Cinnamon Toast or Cheese Toast- Um, no recipe for these. :) I make a mix of sucanat (1 cup) and cinnamon (4 TBS) and keep it stored in the cabinet for cinnamon toast, which we have maybe twice a month! :) Butter, sugar and cinnamon.. yum!

Crunchy Granola Bars - When I make these I just chop them up and use them as granola! I usually leave out the chocolate chips and add cranberries, sunflower seeds or raisins (or a combination)! This is going to be my replacement for cereal! I love it with milk, the boys love it by itself!

Kale and Onion Breakfast Casserole- So the boys won't touch this but it's still good! Maybe you're lucky and your kids will! It's super good and super easy! The hubs and I love it!

I'd like to try a good baked oatmeal recipe that the boys might actually eat! I love oatmeal but they won't hardly touch it!  I recently made one on that I found on Pinterest (can't find it now!) but they wouldn't eat it. I loved it though! There are SO many to choose from though! I'd also like to try this muffin tin egg recipe (with full fat cheese and maybe some nitrate free bacon since my boys don't eat sausage). Luke might eat eggs in the shape of a muffin!

What are some of your favorite non-cereal breakfast?

Thanks for sharing these. You might get me out of my "same thing for breakfast every morning for the rest of our lives" rut!