The second half of last week was a doozy! Here's a recap, that might turn into a novel... :

Thursday: Eli fell down the stairs. Went to the ER. Had a Cat Scan. He's fine.

Ok, so I can't just recap that! It was almost nap time for Eli, which can be anywhere from 10:30-11:30am. I was checking my email (grr, I'll talk about that in a minute) and the boys were playing. All of a sudden I hear something falling down the stairs. My first instinct was not that it was my child. I thought that Luke had probably gone upstairs and was rolling a toy down the stairs. -Let me interject here and say that we had a barrier up so that Eli couldn't (or so we thought) get up the stairs. Our traditional baby gate would not fit there so we had a pretty good (or so we thought) barrier up. We had tested it and Eli didn't seem to be able to get up the stairs. Can I also just chime in and say that when this happened he was one day shy of being 9 months old! Seriously. - So, I look up from the computer to see what Luke is throwing down the stairs and I see my baby land! I cannot tell you what that felt like because words cannot describe it! It was horrible! I grabbed him up and ran outside and started yelling for the Hubs (who was out blowing up Luke's new pool). He ran in and we began to look Eli over and calm him down at the same time. He was screaming, which I was thankful for, to be honest. After he calmed down, he seemed perfectly fine. He had one small bump on his head but other than that was acting completely normal. We both agreed though that to be on the safe side we wanted to get him checked out. I had not showered (it was one of those days) so Luke stayed with me and the Hubs called his dad to come and ride with him to the ER. We wanted to keep him awake and since it was nap time I knew that if someone wasn't in the back with him he would be asleep in no time. Oh... while we were waiting on the Hub's dad, I asked Luke what happened. He said, "I pushed him." Gasp! Yes, he pushed his brother down the stairs. I also wanted to know where Eli had fallen from so I asked Luke to walk to the step that Eli was on and he walked to the TOP step (there are 12!!!). They are carpeted but the floor at the bottom is hardwood. Since I had seen Eli land I knew that he had not hit his head directly on the floor, which is a blessing. Well, we had to deal with the whole Luke pushing Eli down the stairs later. I don't think he was doing it out of pure meanness* (is that a word??) although Luke does like to pull Eli's legs and slide him across the hardwood.. and I've caught him a few times trying to ride Eli like a horse. I know that Luke did not know how much danger he was putting his brother in by pushing him! But I knew that we needed to have a talk later! So, I got a quick shower (chock full of prayer for my little man, repentance for being at this stupid computer and just crying from the shock of it all!) So, I got to the hospital about 30 min later and they had just taken Eli back. The Dr checked him over and said that everything on the outside looked fine but they wanted to do a cat scan. So, we waited and then they put my sweet little angel on that big ol' machine. He was pitiful because if you know my Eli, you know he does not like to stay still. It didn't take long though and he was unstrapped and back in my arms! About 15 minutes later, the Dr came in and said that he had a few bumps on the outside of his skull but everything on the inside was fine. He said, "He's one lucky little boy." But I knew that God had protected my baby that day. Luck had nothing to do with it!

God taught me a big lesson that day. I have always tried to limit my computer time during the day. I rarely blog during the day but I do occasionally check my mail or facebook when they are playing. Lame and stupid. I could have prevented what happened if I had been in the same room with my children and not had my face stuck on this computer. I thought they were playing in the den. I was so mad at myself. So mad. I hated this computer that day. Hated it. It was my fault and I knew it. So, I had to repent. And that's what I did that day in the shower. No more computer unless the kids are napping or in Luke's case 'resting' (which is what we call him watching a Thomas or some other type of dvd). I don't think the computer is evil (although, if you'd asked me Thursday, I would have said it was) but it can be. I love to blog and I love to keep up with friends on facebook. I also love to send pictures of the boys to friends and family through email. And theirs also the necessary bill paying and such that I do. But that can all be done when the kids are in bed/napping or the Hubs is playing with the boys. I was wrong. I am thankful for the grace God showed me on that day. He is so good and I am so unworthy!

By the way, we now have a metal gate at the bottom of the stairs that fits very well! :)

Now, here is the summary of the rest of the weekend:

Friday, I woke up feeling HORRIBLE. I had felt like I was getting a cold Thursday but Friday I knew I needed to see the Dr. I get sinus infections often and I knew that's what it was. Luke's 3rd birthday party was Sat. so I didn't want to wait, not to mention that I felt really bad. Even if we wouldn't have been having the party the next day I'm sure I would have went to the Dr anyway. So, sure enough it was a sinus infection. Since I'm nursing there isn't much they could give me. I got an antibiotic and a get well soon. This is my 2nd sinus infection while nursing(had one in Feb) so I knew that it was going to take a while to get over since my Rx options were limited. I prayed all Friday night that I would feel better Saturday so that I could enjoy Luke's party. And I did... or at least I was too busy to really feel bad. Because after the party I felt horrible again! The party was a success though. Luke had so much fun! We had it at Party Central or the "Jumpy Place" as Luke calls it. Luke's room was decorated in Thomas and he had a Thomas cake. He loved all of his presents! When the lady announced over the mic "We all wish Luke a Happy 3rd Birthday" tears came to my eyes. I just wanted to cry!! I was like, Oh my goodness, my baby is almost 3!! (His actual birthday is June 5th or 'fif June' as Luke likes to call it). I still can't really believe it.

I stayed home from church this morning. Partly because I still feel bad.. and partly because I look like Rudolph. I do feel better this evening though. Tonight I can breath through my nose pretty good. And that's a great feeling considering that the past two nights I couldn't at all. So, there's what's been going on around here.. sorry it was so long! :)

Here's one of my favorite pictures from Saturday: 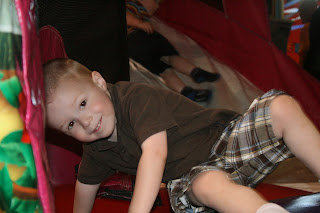 
*Evidently meanness is a word because spellcheck says so! But doozy isn't! :)

Lessons learned from experience and the experience of others! :-) You are an excellent mother!! Thanks for sharing your heart!

What a week you have had! I agree with Misty, you are a great mommy! We have all had those moments (trust me, I have had more than a few)

i am so sorry that happened! i had tears in my eyes reading it. i think it is fabulous that you were able to run to God with your anxiety. we serve an awesome God and i really don't know how people can live without him. but, let me say, i can't believe Luke pushed him! I would have FREAKED. but i could TOTALLY see cogan doing something like that and having no good reason at all (one time i am thankful we don't have stairs, lol). i hate it for you, but this is a great reminder for me to be careful letting cogan be alone with ruby. we work on it a lot but it just doesn't seem to click that he needs to be careful with her. so glad eli was okay and i hope this week gets BETTER everyday! :-)

Wow! Bless his heart and thank God for protecting Eli. I'm glad he only came away with a bump. I hope you start feeling better soon.

I can't believe they are 3 already! Milly was here yesterday on Ashlyn's birthday and we talked about Luke turning 3 too. How the time has flown, our babies are growing up!

Bless your heart...you've had quite a time recently! I'm glad Eli was fine, and that the party for Luke was a success. Don't beat yourself up about the fall/push. If it wasn't that, it might have been something else and you can't watch them 24/7. I can appreciate your desire to not use the computer unless they are asleep or resting, but this accident doesn't make you a bad mother!

Hang in there, and hope you feel better soon!