I should be in the shower...

Don't tell me that I am the only Mommy that doesn't always get a shower! It's ten minutes until 4pm and I haven't bathed. I'm not sure why I decided to let you all in on that fact.. I just did.

So, the real reason for this post is to let you all in on a new obsession of my 2 year old. Here it is: 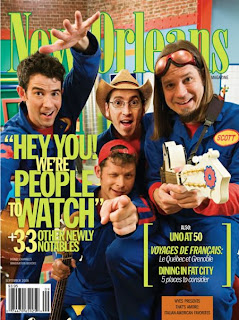 Those are the Imagination Movers and Luke LOVES them. It comes on Playhouse Disney and we have all of the episodes DVR'd. I will not even admit to you how many times we have watched them. Shortly after this obsession began the Hubs found a cowboy hat of his from back in the day. When Luke saw it, he went nuts! *see the middle Mover from the picture, whose name is Smitty by the way* He put the hat on and got his Leap Frog guitar and went to town! I have got to get it on video because it's hilarious! Luke also randomly calls himself different Mover's names. "I'm Scott (insert Dave, Rich, or Smitty)" And he also puts on sunglasses for Wobble Goggles (see Scott in the above picture and yes, around our house we call them by first name.. like we know them..) and calls them "Goggle Goggles". Are you impressed that I know so much about this TV show?... really that just shows how much my son LOVES it.
It really is a cute show though and one that doesn't get on my nerves!
Yet.

Ashlyn has started watching that show too and really likes it! I kind of like it better than the Wiggles, I just dont understand those men! haha.