I thought I'd take a little time today to share a little about what's going on with each of us! 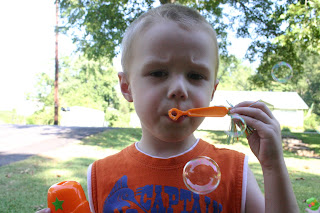 First Luke: Luke is a typical boy! He loves all things weapons, although the boys don't actually have any! Not that we are against them as toys.. just that we don't have any. Because, with boys, even if you don't have any.. they will make them. Luke makes guns and swords out of his Trio blocks all of the time! He can be really silly and get everyone to laughing, especially Eli! At the same time he can be really moody and need his space, but don't we all?! He loves playing soccer.. well, he loves going to soccer practice and games! He's not much of a player yet! He really likes to socialize and play (games, not soccer) with his teammates! He's not very big on going after the ball, he'd much rather it come right to him. And I mean, that's probably the only way he will ever make contact with it! It will have to land right in front of him... and then he still may not kick it! He's having fun though, and that's what matters! He LOVES to get dressed and likes to dress himself. He doesn't always match but most of the time I just let him do whatever. The only time I intervene is when we're going to church or somewhere special. He also loves to wear socks and shoes! He's not a big flip flop or sandal wearer. There have been times when I just had to make him wear sandals! Thank goodness colder weather is around the corner (I hope!). Luke is a great big brother (most of the time). He and Eli are starting to play more and more together. Luke is pretty protective of his brother and lets me know if Eli is doing something that might hurt him. The sweetest is when Luke steals a kiss from Eli and he doesn't know anyone is watching! Melts this mommy's heart! They do fight, of course, but they really are great friends! 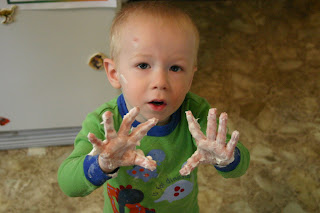 Now Eli! Eli is a Mommy's boy! Seriously! Hmm, I feel like I've said this before! ;) Well, he still is! He is also much more go with the flow and relaxed, especially when Mommy is around! He's not near as moody as Luke! He loves to watch Luke practice and play soccer. He also loves to throw balls! He really has a good chest pass, so we may have a future basketball player on our hands! Eli also loves getting in to everything. Every. Thing. I know we saw this coming. We just knew he would be the child to strow everything out, get into stuff, make huge messes, never understand the meaning of "No" or "Don't Touch!" (see above picture!) I think it's more his little personality rather than just the 'terrible twos'. He's very independent! He thinks he can do anything and will try! And all the while he is a little love bug! He will gladly sit in your lap for hours or shower you with hugs and kisses!

The Hubs- The Hubs is in full swing school mode. He had his first Algebra test last week and made a 99! So proud of him! He started off the school semester doing homework in the kitchen and that did not work out! It's true that the kitchen is the hub of the household! So, we cleared out the treadmill in the bedroom (need a new place to hang clothes now!) and put a table that the Hubs mom had given us in it's place. It's worked out much better now, although wireless has been giving him problems! And since his school work is online (even his 'on campus' class has online homework, that's been trying for him.

And me- Well, my knee/upper thigh is still giving me problems. I went to the Dr a little over a month ago with it and was told after an X-ray that I had a tilted knee cap. I was told to take Rx ibuprofen and do some exercises. But I feel like there is much more going on. I haven't had the sharp pains in my thigh lately but I still have a place right above my knee that is swollen. I've tried this week to keep it up here and there but it really is hard when you're home with two boys all the time! I just had to let some housework go. My knee has felt better at night (when it usually starts throbbing) but the swelling hasn't changed. So, I'm not sure what to do. I haven't been exercising either, for fear of hurting it worse (I kind of feel like Jillian might have been part of my problem!). And I can totally tell! I haven't gained any weight but I just don't feel as good.. and I feel all stiff!
I just finished reading Intimate Issues. And all I'll say about that is that it's a good book for married, Christian women! I just started reading The Mission of Motherhood by Sally Clarkson. It's sooo good! I really wish I was reading it with a group of women, so I could discuss it! It would be a great group discussion book study! I didn't get any response with that idea though, but maybe in the future! I also just started reading Hebrews. I read Joshua, Judges and Ruth in a row and just thought it was time for some New Testament!

Well, there is a little bit of info on what's going on in our house!