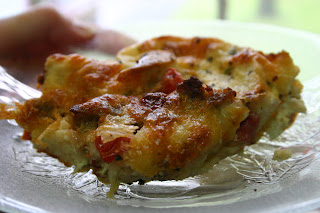 On days when my hubby is off I love to make hot, healthy breakfast for us! Egg based casseroles are one of our favorite and I tried a new one today from The Hour That Matters Most by Les and Leslie Parrott. (You can read my review on the book here)
I love trying new recipes and this was no exception! Of course I did change the recipe up a bit by substituting some of what we had on hand (and used more real foods). That is what is so great about this recipe, you can interchange some basics and have a whole new taste! So here is the recipe with my substitutions in parenthesis. 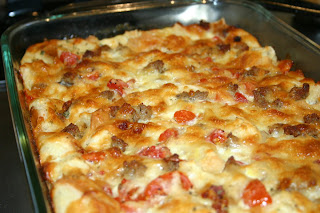 This recipe would work well with a variety of vegetables. I think adding sauteed onions would be great! And to get in some green veggies a couple of handfuls of spinach would work well!

The flavor was great! My only downside was the egg/milk mixture. I feel like I needed more eggs, less milk. I like a more egg-y, dense base. The ratio of milk/egg in the recipe leaves the casserole more custard-y and I'm not a big fan of that texture. I think I would rather have maybe 6-8 eggs and 1 cup milk. I will definitely try that next time! It really is just a personal preference! All in all it's a great recipe to have and is great for weekend family meals! I will let you know if I try any other recipes from the book!