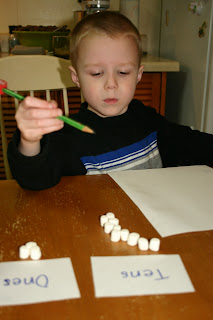 School started back for us 2 weeks ago. There are a few things that have changed this semester from last semester. Luke is doing well in all of his 'subjects'. He's doing great in his phonics but we've had some rough patches. I think we're on lesson 56 of 100. We could easily be finished if I pushed it, but that would be torture for both of us. I refuse to compare my child with anyone else and I refuse to 'make' my five year old do school just for the sake of doing it. I want him to love to learn and I want him to have fun (and me too!). So, all of these thoughts have brought about a little change. We are more loose with school this second half. I haven't thrown out the books or anything but our school hours aren't necessarily an hour and a half long. We always read our Bible.... sometimes we play a game, paint, draw or read... then we eat lunch. Then we may have a math lesson with Cheerio's. In fact today we did! He had to place the correct number of Cheerio's in the tens and ones place! We also played a thinking game by taking a few objects and putting them in a bowl. I'd remove one and the boys had to try and remember what was missing! That was fun and they kept playing even after we were 'finished'. Earlier in the day we spent time at the library where they had story time and made a snowman out of marshmallows with other kids! Tonight Luke read us a story out of his phonics book. The point: none of this was work.. it was fun and Luke enjoyed it. School has been much more relaxing and 'one piece'. I like it. And I'm pretty sure the boys do too. :)

I had been feeling the tug in this direction... and well, it's not really a big change. But when I read this , I thought, "YES!" I love Sally Clarkson and I'm completely jealous that Sarah Mae gets to chat with her but I'm so thankful that she shared the wealth! (Also, super thankful for Sally's blog and books... what a help to mama's like me!) I just love the advice that Sally shares and am incorporating it into our day. My most favorite thing that Sally shares is the advice about the TV. I don't know about you but my boys get so ill and whiny when they watch TV/play computer games. They are getting instant gratification that doesn't require them to think or imagine. So, when the tv is off, life doesn't do the same and they get frustrated. I really hate the TV. I don't watch much at all but they like a few shows. Poor Eli just loves his morning TV. He is not a morning person and needs a while to wake up so I don't think we'll ever cut it out completely (but maybe... any ideas?). I say all of this to say, we're slowly cutting back our TV time and that is a good thing.

Now, if I can just find a way to make housework more fun and relaxing.... Hmm..

Speaking of homeschooling, I saw this today and just had to share. I love this! My boys are little and we never hear anything like this but it's still so funny! And he dedicated it to his mom!