Well, we're stuck inside on this beautiful day. Monday and Tuesday we stayed inside mainly to keep away from pollen. We got out yesterday for a while and had planned on today but Eli's running a fever! He woke up last night around 11pm and was warm. So, I gave him some tylenol. Then he was up at 3am, 6am and finally 9 am. Needless to say when my alarm went off at 7am, I turned of OFF! He's stuffy, so my guess is that he's developed a cold from the allergies. It seems like we can't get a break! I'm seriously hating pollen right now!! Maybe we should move! (Yeah, that' show much I'm hating it!)

I don't mean to be a Debbie Downer today! I just want my boys to be able to enjoy the weather!
So, while I'm sitting here and the kids are watching Toy Story, I'll share a few pictures of some of our crafts, mainly our alphabet crafts. (Here is the our previous alaphabet post)

At the end of March we worked on the letter C. Our Bible verse was, "Therefore if anyone is in Christ, he is a new creation." 1 Corinthians 5:17. Here is Luke practicing making his C. 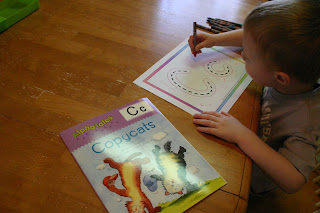 We also had a fun caterpillar snack: Peanut butter on Ritz crackers, pretzels for feelers and raisins for eyes! 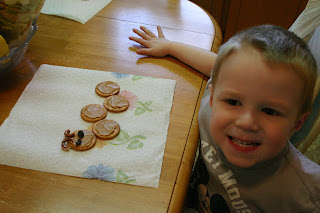 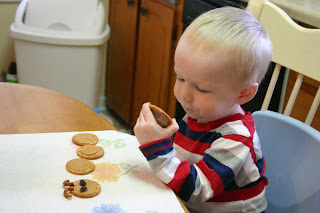 And from Confessions of a Homeschooler, I downloaded this cute caterpillar number sequence game! Luke had fun putting the numbers in order! He's also asked to play this game several times since then! I wish I had a laminator so we could use these for longer! 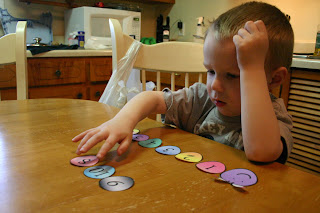 I found a cute letter C craft for our alphabet book that went with our caterpillar theme but when I saw this C is for Crab craft from Totally Tots, it was too cute to pass up! 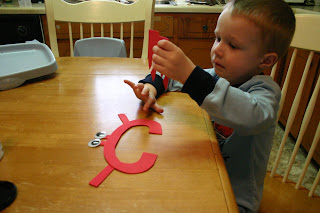 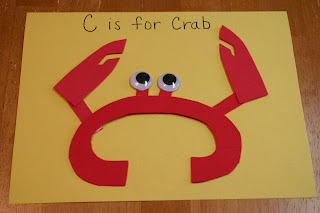 Isn't it super cute?! We did do a few Easter themed crafts but I don't have pictures! It was the week we were staying at my mom's because of the bath remodel. I forgot my camera! I'll share our April crafts later. We're only doing two letters this month, also because of the bathroom remodel. It's technically not finished (just painting the door is left) but the majority of the work was finished yesterday. So, it took longer than expected and kind of threw our schedule off!
Ok, off to get lunch started!

You are such a good mama! Love those alphabet crafts!

I've used some clear contact paper on Regan's work that I wanted to last longer. It's no where as great as a laminator but works pretty good.