So, if you read my last post on letter J, you know that I don't have the pictures for letters J and K. But to my surprise a few of the pictures from week K were in my August album that I must have uploaded along with Luke's soccer practice pictures! I did go back and take a few pictures of things that weren't there! It's been 2 weeks since we did letter K so I may have forgotten all that we did! Here are the high lights:


We started off the week talking about thing that start with the letter K. The boys colored/traced their letter K's. I got these printables from Confessions of a Homeschooler. We typically do these every week, although I don't know if I always get a picture. I usually go over how to correctly write the letter and then Luke traces his. Then he usually colors his in. Here he is helping show Eli how to draw his K! 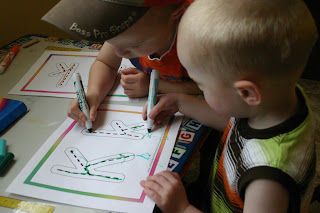 We also took a trip to the library and to our surprise one of the story time books was about a Kangaroo. Then all of the kids colored a picture of a Kangaroo! 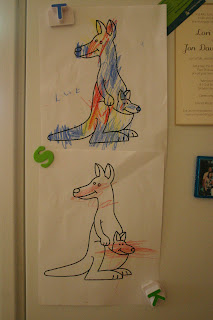 We also did a Totally Tots alphabet craft, which was a Kangaroo. Luke and I also watched some videos on the National Geographic website and learned some facts about two different types of kangaroos. Did you know that kangaroos hop because they cannot move their legs independent of one another? Well, now you know! There is also a species of kangaroos that live entirely in trees! 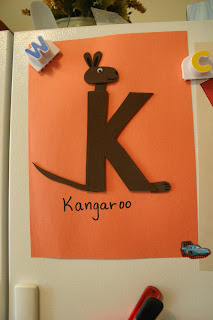 Next we made a letter K out of popsicle sticks. Luke colored them and then I hot glued them together. I couldn't take a picture of it because a certain little guy broke it! Luke also colored two more popsicle sticks to make a Kite! Luke had lots of fun "flying" his kite around the house! 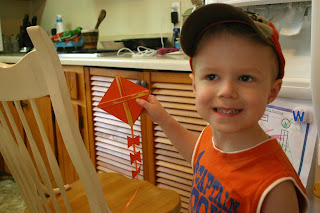 Then we read Hamlet and the Enormous Chinese Dragon Kite!

Our verse this week was "Be Kind to one another." Ephesians 4:32a. We talked about what it means to be kind and all throughout the week we pointed out different things that the boys did that were kind! 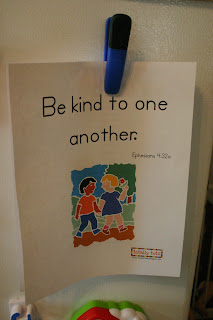 We also made homemade popcorn and did some fun measuring and sorting with some extra Kernels! I gave Luke a cup full of popcorn kernels in a bowl and then gave him several different measuring cups and spoons. We measured out basic measurements and then I just let him have fun playing and scooping them from different containers! Hello, math! 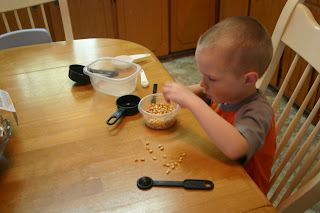 And hello sweeping up kernels from all over the floor! :)

Well, that catches us up! Next week we will start Letter L!

How fantastic! This gives me great ideas on things I can do with my preschooler this year! I'm glad I decided to stop by your blog!

Thank you Crystal! I love the links you shared so much I updated my post to include them and a link to your blog!
I appreciate your posts, it helps to see someone's actual day and how they do it!!
Blessings,
Joy